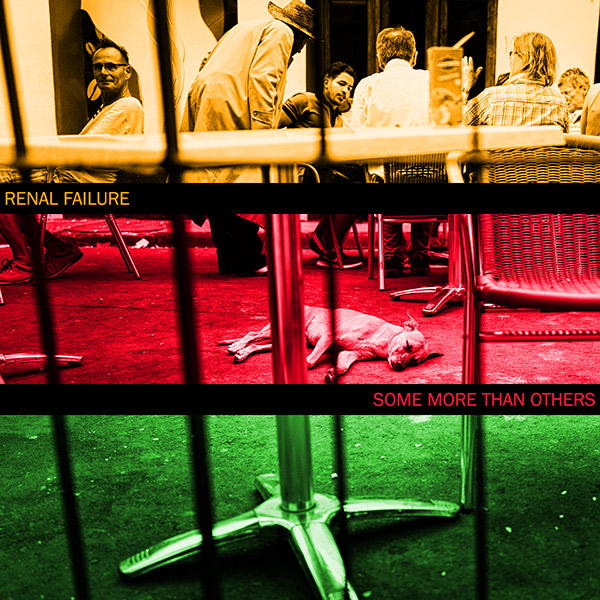 Renal Failure
Some More Than Others
Renal Failure are arguably the biggest act to emerge from Gary, Indiana's burgeoning Garycore scene; only Aerosol Convent and (perhaps) Manspreader contend for that distinction. Their 2018 debut, Tour de Force, was a tour de force, with tracks such as "Freemium" and "Stop It Or I Will Cut You" elbowing their way up the charts, both here and in the for-now-United Kingdom.

But Some More Than Others, with ass-kickers like "Floater," "Such As You've Never Seen," and "Buzzard," announces that last year's debut was in fact just a warm-up; that Others is the real deal, that we only thought (not without cause) that Force was the real deal. And the album's last track is a haunting, heartfelt cover of "Unce, Tice, Fee Tines a Mady," hinting at a softer side which, perhaps, we'll see more of in future. A.
_________________ 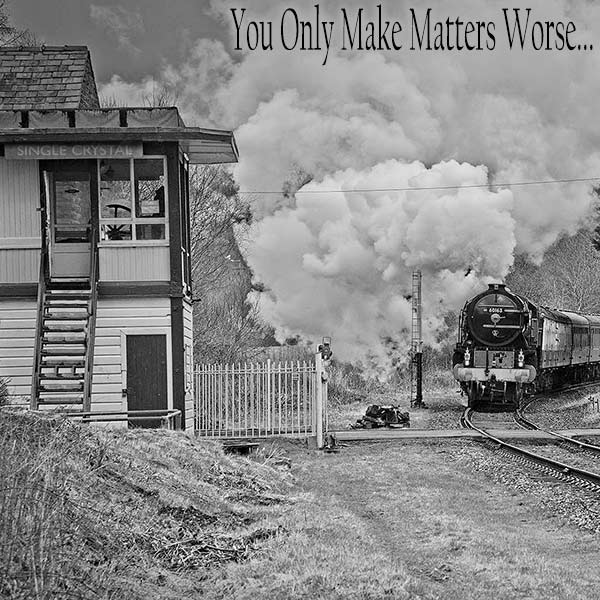 Single Crystal
You Only Make Matters Worse
Single Crystal's current lineup consists of lead guitarist Jeremy Booth on drums. Nobody else is on anything, including guitar or bass (or vocals), because the only member of the band in its current configuration who might play either of those instruments is the band's (non-verbal, or at least not-singing) new drummer, Jeremy Booth.

A direct result of this unorthodox lineup is that the Crystal's fifth album, You Only Make Matters Worse, is not an easy listen. "Tucson," for example (judging by the lyrics available on the band's website) could make for a poetic reflection on Single Crystal's hometown of Tucson, Arizona, but there is no poetry, nor any reflection, on the track as released on Worse because there are no vocals. There are only drums.

Snowboard Camp
Looking for Women's Names
Losercore pioneers Snowboard Camp are in a bad mood. The first track on Looking for Women's Names is "You Guys Fucking Suck, Okay?", a bit of hate-mail to their former fans, the ones who abandoned them roughly around the time of 2017's Droppings. Next up is is "Shitstain Sally," a see-through reference to Youtube phenom Lisa430's ongoing and gleeful campaign of scorn and mockery against them. Snowboard frontman Jono DiNapoli recently learned the word "ilk" and feels that "Lisa430 and those of her ilk" are the cause of his band's undeserved descent into irrelevance. That Lisa430 is DiNapoli's mom only adds gasoline to this fire. C-.
_________________

Batley
Even Less Than You Settled For
So the first thing is, go to the supermarket or whatever and choose a brand and flavor of dogfood that you think you would like if you were a dog. And this is already tricky, because the question isn't, "do I like beef or chicken more" or whatever, but if I were a dog, which would I like more (or would I prefer some other flavor, blah blah blah). Mind-bender territory, right? But this is also where it gets interesting, because you're taking yourself outside of yourself, but attempting, then, to insert yourself back into some version of your "self," if you will (you, but as your dogself, or perhaps a dog, as its youself), and considering what dog-you would prefer.

Then, it's time to put the dogfood into a big bowl and then pour a half-cup of sugar in there too and mix it up, the dogfood and the sugar. And finally, time to eat it, all of it. Which you can keep down; you might not feel like you want to, but you can.

You can and you will.

So Even Less Than You Settled For is like that a bit; a bit like the feeling of keeping it down (but in a good way). Batley so often puts us in that sort of position — as, certainly, it did with last year's I Am, You Am, but also with "classic" Batley (How To Parallel Park, Matching Napkin Rings, etc.).

Photonics
If They're Okay, Then It's You
Fart-glam has been declared dead a few times since Photonics' 2010 effort SBD introduced the genre. But if If They're Okay is any indication, music made primarily by licking your palms and then using them to make funny noises with your armpits isn't going anywhere. Yay. B+.
_________________

Ocoa Point
erA yehT nahT retramS erA uoY
The dogfood exercise from before applies to this as well, Phoenix-based Ocoa Point's latest release. Except that given a choice, Ocoa goes for the "cleverness" angle. "You are smarter than they are" slleps, sdrawkcab delleps, hcihw, eltit mubla fo eciohc rieht si "ssenrevelc" siht fo elpmaxe na. (Because you'll appreciate it more if you have to work for it. Or something.)

Ashdod Sand Dune
Do It the Right Way
Going to an Ashdod show this summer? Look at you! That's great. So you own a hazmat suit, right? And an umbrella, a sturdy one? Good; bring those fuckers, and antibiotics if you have any, because you're in for a shitshow.

They'll open with something like "Costco Surprise" or "Take Five" or one of the "ass trilogy" tracks and you'll think you're in for some of that old-time Ashdod religion. You will be wrong. Don't think so? Then pick up Do It The Right Way and have a listen. "That's My Mom, Asshole" will lull you into a false sense of security with its pleasant, if Menudo-inspired, harmonies and the fact that it has a melody. You'll tolerate the mercifully short "Clue," the band's homage to the board game "of yore." (Rule of thumb: the word "yore" in a song lyric is a reliable sign of terrifying things to come.) It'll be downhill from there, hitting rock-bottom with a cover of "Strawberry Fields."

So bring that hazmat suit. (Really not optional! The Lakeland 505 won't let you down, even if Ashdod busts out "Halitosis Holiday," but you don't want that.)